Everyone already knows the advantages of buying a used car, right?  Right.  Someone else takes the hit on the depreciation and you pay a lot less for your “new” car.  I know some people are firmly in the “new car” camp and won’t hear talk about a used one, but I’m personally a fan of getting an older one for much, much less money.  My car is nothing to me except a way to get from point A to point B.  I’m not interested in cars, don’t feel the need to have one as a status symbol.  Even if it’s only a status symbol of being in the middle class.  My car is a 2005 KIA Spectra.  She’s nothing fancy, but she runs like a champ and doesn’t cost me a fortune.

But this whole talk about new/used cars is a complete digression from where I was going with this post.  I’m talking about used sewing machines!

I got my first sewing machine for Christmas 2014.  It was a very cheap, very base model.  I saw no sense in paying much for a machine without my knowing if I would even like, or be any good at, sewing.  So I had my basic machine that, at first, did all the basic things.  After a while it started somehow twisting itself between the spool of thread and the needle.  I thought it was something I was doing wrong, so I asked my sewing guru.  She concurred that it was strange and she wasn’t sure why it was doing it either.  I worked with it a bit more, but having to stop, untwist and rethread the needle was getting annoying FAST.

Cut to yesterday.  My sewing guru had mentioned a number of times that I should consider getting a used machine.  She said I could get a higher quality machine for a lot less money, and would likely be a lot happier with it.  Seems logical, right?  So I decided to go check the sewing shop and see what they had.  The guy asked me what I was looking for and I said I wasn’t really sure, and asked what he had.  The first thing he showed me was a Singer Confidence Quilter.  He gave me the basic rundown on it, told me it was nearly a $300 machine new, and gave me his price.  After that he showed me a few more machines, gave me a little info about them, and asked if there was anything I liked.  I wanted the Singer, but I wasn’t convinced yet.  I told him I wanted to think about it a bit, and I’d be back if I decided to get it.

The first thing I did was text my sewing guru and ask her to check it out online and see what she thought.  Then I did the same thing, and read some reviews.  All in all, it seemed to be a good machine with agreement from all sectors.  I went back in to get it, and when he was gathering the accessories up, he looked in the bag and saw there were two quilting feet in there that would add significantly to the value.  It was pretty obvious he didn’t know those were in there until it was too late.  Score one for me!

He ran a few stitches to test it and asked if I could come back today to get it.  He said he wanted to take everything apart and be sure everything was in perfect condition before I took it home.  Today I went and picked it up, and for less than half the Amazon price, I got the same machine plus $100 worth of accessories for free.  Suffice it to say, I am one happy Cat tonight!

The moral of the story is… if you’re not opposed to buying used, it’s a great option to look into.  Mind you, there’s a difference between “used” and “thrift store”.  At a thrift store you really don’t know what you are getting, whether it will work, whether it will work RIGHT, and for how long.  You can find some great deals at a thrift store and if you’re willing to take the risk, it’s a good option.  The route I went was simply used, I suppose you could say refurbished.  It was a previously owned machine repaired and tuned up, so that I can be sure it will run when I’m ready to use it.  With the accessories, I saved myself well more than 50% by shopping used, and patronized a small, local repairman at the same time.  Now I will be considering the used market for a lot more things!

And because good blogs need a photo, here’s my new baby sitting on my cutting table. 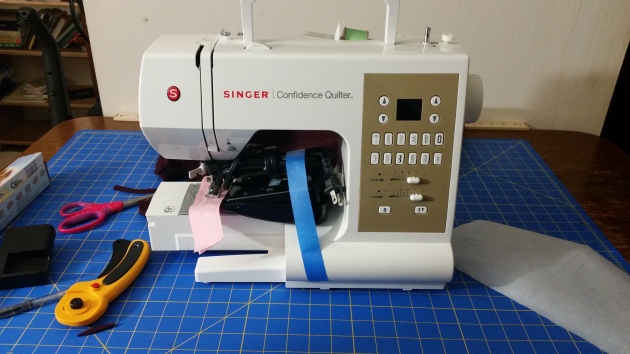 Published by Frugal Living and Crafting

Hi, my name is Cat! I'm working on the fine art of learning to live and enjoy crafting on a budget. There will be steps and missteps, which I am planning to share on this blog. View all posts by Frugal Living and Crafting